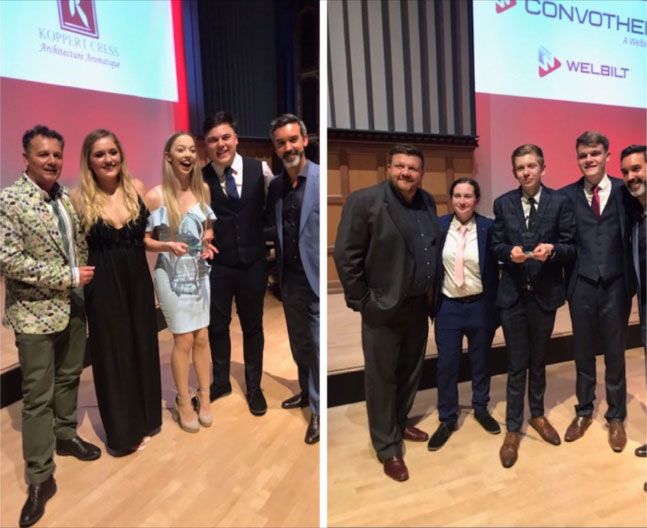 Two trios of young chefs representing Loughborough College and its Radmoor restaurant lined up with three other finalists from across the country before being announced as winners across four of the five categories.

The Best Use of Living Ingredients prize will see the students spend three days in Holland with sponsors Koppertcress and as winners of Ignite for Imagination, the students will spend a day with the UK’s representative in the Bocuse D’Or, the world-renowned cooking competition.

Loughborough College even won an additional ad hoc prize, to create and pipe the best authentic Knickerbocker Glory – which went to Kieran.

With VIP access at the annual Skills for Chefs conference in Sheffield, where the 2019 showdown took place, the students were also given the opportunity to meet a host of celebrity chefs, including Michelin starred Tom Aikens, Paul Foster and Clare Smyth MBE – the first female British chef to hold and retain three Michelin stars, plus James Golding and Ryan and Liam Simpson-Trotman.

“I am so proud of the students,” said chef lecturer and hospitality lead at Loughborough College, Darren Creed. “They have worked so hard and it was brilliant to see both teams selected to go forward to the final - but to then achieve what they did is outstanding.

“To see them win four of the five awards was amazing. The students were over the moon. We are all blown away. It is a brilliant finish to an incredible year.”

The young chefs were competing against Westminster Kingsway, City of Glasgow and Kendal colleges. With Kieran, Ryan, Isabel and Finlay in the kitchen and Toby and Grace front of house, each of the teams were challenged to cook and serve a three-course menu, including pre-arrival cocktail and speciality coffee to finish the meal, and to select a starter and main course wine.